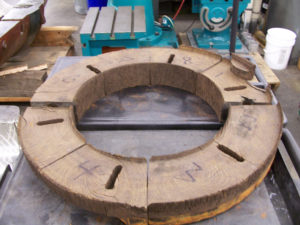 Lignum Vitae is Leading the way back to Water-Lubricated Bearings in the Hydro Industry ahead of EPA regulations and is NSF 61 Certified.

THIS THRUST BEARING WAS ALMOST SIX FEET IN DIAMETER AND PROVIDED ALMOST 100 YEARS OF SERVICE!

We are proud to assure you of the availability and the long history and future success of your power plant.  This material is the answer for underwater applications. Composites such as Thoradon have been trying to match the durability and longevity of genuine Lignum Vitae but to no avail. So when your hydro plant needs a new bearing make it the longest lasting water-lubricated bearing on the market.

After numerous interviews and visits to hydro installations we discovered that the material operated flawlessly for decades resulting in millions of dollars of savings for  hydro plant operators.

“Discontent is the first Necessity of Progress”

“The Value of an Idea lies in the “Using of it”